New Nissan worth the wait

Nissan has joined the ranks of those offering a flashed-up flagship ute in New Zealand. David Thomson takes the resulting vehicle — the N-Trek Warrior — on and off the beaten track.

Ford and Holden (before its demise) led the way with the Ranger Raptor and the HSV SportsCat. Toyota has recently announced its Hilux-based equivalent, the Mako, while the Jeep Gladiator Rubicon is an American take on the same theme.

Nissan is also in the hunt for a share of upmarket ute sales, with the Navara N-Trek Warrior. Developed at the request of Nissan Australia, the N-Trek Warrior is produced by Nissan and Australian-based specialist automotive firm Premcar.

The N-Trek Warrior starts life as a regular Navara ST-X double cab before being shipped to Premcar in Melbourne, where it is significantly re-worked.

The upgrade package, which took about a year to develop, includes visual enhancements inside and out and extends to more serious work as well — there’s a 40mm lift in ride height achieved by a combination of suspension revisions and special all-terrain tyres. The revised setup extends the vehicle’s track too, and new suspension springs and dampers have been fitted to optimise ride and handling.

With enhanced off-road capability an important part of the equation, the N-Trek Warrior is also fitted with significant under-body protection.

Mechanically, the N-Trek Warrior is identical to other members of the Navara family, featuring a 140kW/450Nm 2.3-litre engine and seven-speed automatic transmission.

What’s it look like?
Longer, wider and taller than a regular Navara, and riding on specialist 275/70 tyres sourced from the US and mounted on black-alloy rims, the N-Trek Warrior has a firmly planted and confident air.

Styling is enhanced by flared wheel arches, a sturdy rear roll-bar, a new front bumper with integrated bull-bars and an LED light bar across the grille.

Special decals adorn the vehicle’s flanks, and there is orange trim highlighting around the front fog lights, on the mirrors, and on the running board sides.

The wellside is the same size as a regular double-cab Navara, measuring 1503mm long and 1560mm wide (narrowing to 1130mm at the wheel arches). It is fitted with fixed and rail-mounted adjustable tie-down points.

What’s it like inside?
A preponderance of hard-finish interior trim surfaces (only the armrests are padded) are as expected given the N-Trek’s origins, but the front of the cabin has plenty of visual enhancements, including orange-pattern inserts and embossed headrests and orange contrast stitching for the seats, steering wheel and floor mats.

The driver’s seat is power-operated and the view from behind the wheel is commanding. The raised fenders emphasise the vehicle’s width and serve as helpful guides as to where the front corners of the vehicle are.

The dash and centre console arrangement is the same as a regular Navara, with burnished metal highlighting strips and an eight-inch centre display screen neatly integrated into the dashboard.

The infotainment system, which includes Apple and Android synchronisation as well as more traditional Bluetooth, USB and AUX connectivity, is part of the centre touchscreen. The high-resolution screen’s graphics are good, and the system is intuitive to use. A trio of 12-volt plug points are also provided.

The centre storage bin is decently sized and here’s a potentially handy storage tray tucked at the base of the central console, but it is shallow with sloped sides, and items stored in it can slide out during off-roading. The rear of the cabin is fairly typical of a double cab, with one of its distinguishing features being a power-operated sliding back window pane.

Along with the various styling and suspension enhancements, the N-Trek takes beefed-up under-body protection, including a3mm stainless steel front scuff plate. It’s worth noting that while the tray payload drops from the normal Navara dual cab’s 913kg to 720kg (due to the extra weight of the rear bar and other enhancements), towing capacity remains unchanged at 3.5 tonne braked.

The N-Trek Warrior is a five-star safety test performer with all the usual stability and traction control and passive brake-assist systems, and front, side, curtain and, for the driver, knee airbags.

What’s it like to drive?
When introduced in 2014, the Navara was a leader in bringing much improved on-road dynamics to the utility segment.

Its fundamental underpinnings have been tweaked since then, but the N-Trek Warrior is the only model for which they have been heavily revised. One of Premcar’s greatest achievements in this regard has been that changes made primarily with an eye to improving the driving experience off-road have also made it abetter vehicle on-road.

Accepting the constraints that come from it being a large vehicle with a modest turning circle, the N-Trek Warrior is reasonably straightforward to drive around town. With a higher seating position than a regular Navara, visibility is even more commanding. Its controls are light and the engine and gearbox contribute to smooth progress, albeit with a sometimes gruff mechanical note.

The open road is dispatched in a thoroughly competent fashion, and ride quality is exemplary by premium ute standards. With the move to wider and more specialised all-terrain tyres, road noise is more obvious, but other premium utes are likewise afflicted, and some more so than this vehicle.

My assessment of the N-Trek Warrior encompassed an extensive component of light to moderate off-road work in East Otago, including negotiating water crossings and surfaces that would have been potentially tricky to negotiate without engaging the diff lock and low-ratio four-wheel drive.

Helped as much by its specialist tyres and superior ground clearance (268mm versus 228mm) as its various suspension tweaks, the test car was confident and assured throughout. Probably the single most important thing one would do to assure progress in even heavier going, would be to add extra weight over the rear axle to maximise traction.

One note of caution: although the N-Trek Warrior has superior approach and rampover angles (35 and 27.5 degrees respectively) to a regular Navara, the need to accommodate a larger spare wheel and associated reconfiguration of the tow bar reduces its departure angle from 27.5 to 19 degrees.

Verdict
The addition of a premium model to the Navara range has been some time coming, but it has been worth the wait. The body kit provides ample visual flash, but it is the dynamic improvements that stem mainly from major revisions to the suspension that are the most impressive attribute of this appealing new machine. 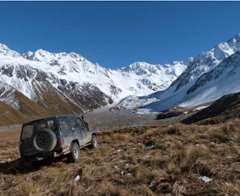