Fans of The Simpsons finally know Homer's real age thanks to a tell-tale close up from an old episode.

The Simpsons have been on our screens since 1989, but fans have just discovered Homer's real age, according to the Sun.

The scene from the episode showed Homer's driver's licence, which had his birthday written down as May 12.

According to the licence he was born in 1956, making Homer 64 this year in real time.

But in Springfield, Homer remains 33, the age he was when the series started in 1989.

The Simpsons has recently been back in the news, with fans convinced the show predicted some of the big events of 2020.

According to fans, an episode where Springfield is invaded by killer bees foretold the giant "murder hornets" spotted in the US earlier this year.

Some fans also claim the show predicted the Covid-19 pandemic in the same 1993 episode, where everyone in Springfield wants to get their hands on a fancy new blender for juicing. 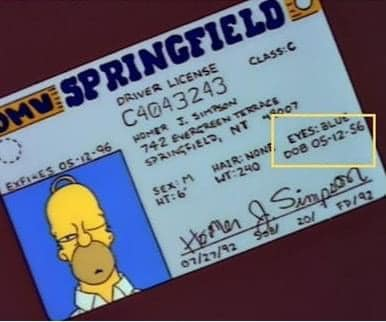 One scene shows a factory worker in Japan coughing on the blenders before they're shipped to the US, where the "Osaka Flu" virus then spreads all over America.

Former Simpsons writer Bill Oakley called the claims the show predicted coronavirus a "stretch" as the episode was based on previous events.

"I don't specifically remember which viruses had been in the news in the decade before we wrote it but there were probably a few," he said.

"The story was assigned to us by the showrunners Mike Reiss and Al Jean and they told us to read The Plague by Albert Camus which is what the entire first act is based on.

"I would say in general when people say The Simpsons has predicted something it is just that we were satirising real life events from years before and because history keeps repeating it just seems like we were predicting things."

-The Star Canterbury via NZ Herald

Scooter riders thrilled to be back on the road