There are sportier choices at the luxury end of the electric SUV spectrum these days, but in terms of refinement, build quality and all-round usability, the Audi e-tron is the best yet.  What’s remarkable is that the e-tron is, in many respects, unremarkable; in other words a compellingly good premium SUV that just happens to be powered by electricity, rather than a self-consciously electric SUV wearing a premium badge.

The Audi e-tron requires those expecting an electric SUV to look like it’s off the set of a futuristic sci-fi movie to re-calibrate their thinking, writes David Thomson.

What’s new? As the first Audi to be designed as a pure electric vehicle, the new e-tron is hugely significant for Audi and the wider Volkswagen group of which it is a part.

A substantial five-seat SUV, it has been on sale internationally since the start of the year, with the first deliveries to New Zealand customers made a couple of months ago. It’s already garnered several awards overseas, and it is a finalist for the upcoming New Zealand Car of the Year title.

The e-tron uses a modified version of the Volkswagen Group’s MLB Evo, which already underpins the Audi Q5, Q7 and Q8, Bentley Bentayga, Lamborghini Urus, Porsche Cayenne and Volkswagen Touareg, among others. Size-wise it fits between the Q5 and Q7, although it sits a little lower than both.

Like the vehicle that most would consider its clearest rival — the slightly smaller Jaguar I-Pace — the e-tron is powered by dual electric motors in a four-wheel drive set-up with one motor driving the front wheels and the other propelling the rear. Power comes from a lithium ion battery pack, mounted under the floor and between the axles.

The second, on the e-tron 55 quattro, deploys a 95kW/h battery pack, and has a nominal range of 417Km. This system musters peak outputs of 300kW and 664Nm for short-burst acceleration in sport mode, while in everyday operation 265kW and 560Nm are delivered. This is the model already here and is priced at $148,500 for the standard 55 quattro and $157,000 for the flagship 55 quattro advanced (as tested).

The e-tron is fully compatible for recharging across the current New Zealand network of 50 kW DC fast charge stations, but is also equipped for the ultra-fast charging stations that are appearing overseas.

Among a long list of optional extras, there is a sports pack (featuring sports seats) available for $4100, a luxury pack for $12,000, and a Technology and Comfort pack for $5800. The latter pack includes cameras in the doors instead of conventional wing mirrors.

What’s it like to look at?
The e-tron is a conventionally-styled Audi SUV, elegantly but squarely proportioned, with the familiar large, hexagonal single-frame Audi grille up front, and a light strip running across its tail.

Closer inspection unveils a few visual EV clues: most obviously the e-tron branding (with additional decals on the test car, just to make the point), the recharge port just forward of the driver’s door, a lack of air intakes associated with the front grille, and the absence of CO2 -emitting exhaust pipe.

There are various other ways to lift the look, ranging from the optional 21-inch alloys and 265/45 tyres fitted to the test car to the radical rear-view camera system described above.

What’s it like inside?
The latest slew of Audi SUVs are notable for the all-round excellence of their interiors, and the e-tron is no exception.

Size-wise, the is is large enough to have been configured with three rows of seats, but Audi has opted for just two. As a result, there’s a large 660-litre boot, and ample room for adults travelling in the back.

Up front, there are two power-adjusting, command-style seats. They are very comfortable for round-town and highway motoring, but provide limited lateral support during moderate to hard cornering at open road speeds.

There’s familiarity from elsewhere in the Audi range in the layout of key controls and instruments, including the over-and-under arrangement of the dual touchscreens that are home base for the multimedia interface. Topped by a brushed metal trim insert, the higher of these two screens is slightly larger, and serves as the primary interface.

Audi’s touchscreens requires firm pressure, but incorporates haptic feedback to confirm selection of particular options. Among the functions accessible via the upper screen are satellite navigation, audio and phone (including smartphone mirroring), vehicle information and settings and weather information. The lower screen is home base for the climate control system, and becomes the keyboard when entering address and other information.

There is some departure from Audi norms in the MMI sub-menus and displays and within the instrument cluster, covering power use, range and battery efficiency. There’s also a quick-access navigation function for guidance to the nearest EV charging facility.

A conventional gearshift is replaced by a drive selector on the centre console. This has a quality tactile feel. Paddle shift controls on the steering wheel, meantime, allow the driver to select different levels of regenerative braking.

What’s it like to drive?
The e-tron is remarkably silent even by the standards of current EVs.

This aural refinement is as apparent on coarse-chip seal at highways speeds as on smooth asphalt around town, and is augmented by the generally excellent ride quality imparted by e-tron’s adaptive air suspension. The turbine-like smoothness of the vehicle’s power delivery is impressive, too; even without accessing the extra grunt available in sport-boost mode, there is ample pep for rapid overtaking and for maintaining speed effortlessly, whatever the topography.

Open road handling is solid and sure-footed, with plenty of grip and fine balance. That said, mid-corner bumps and surface imperfections can ruffle the e-tron’s usually impeccable dynamic demeanour, even when sport rather than comfort suspension mode is engaged. Further, the e-tron’s ability to serve up a truly rewarding experience for the keen driver is hampered by a lack of steering feel and a sometimes intrusive lane-keeping assistance system.

These criticisms should not be taken to imply the e-tron is dynamically flawed; rather, they reflect a deliberate design decision to prioritise comfort and refinement.

The test car was the local dealer’s demonstrator, and out of courtesy, off-tarmac driving was restricted to a short spell on well-formed gravel. However the e-tron has a special off-road mode that raises ride height and changes power delivery as well as an all-road mode, and at the main media launch a few months back, I enjoyed plenty of back-blocks motoring and sessions on the snow at the Southern Hemisphere Proving Ground on the Pisa Range in Central Otago. It’s worth noting too that the e-tron 55 is rated to tow up to 1800kg braked.

How far will it go?
Questions of real world range remain crucial to EV take-up, especially with nominal standard test figures being poor indicators of what’s likely in our part of the world.

Driving from Dunedin to Ranfurly return produced a power consumption figure of a shade under 29kW/h per 100km. This suggests a real world open road range of close to 300km in this part of the world when driving at normal pace, as while the battery has a 95kW capacity its ‘‘usable’’ capacity is actually 84%.

So, and as is with the case with Jaguar’s I-Pace, Dunedin to Invercargill or Dunedin to Timaru without-recharging will be a doddle. A non-stop Dunedin-Queenstown or Dunedin-Wanaka trip is tantalisingly close, and may be achievable with care. Yet unless one has a high tolerance for range anxiety, or is willing to engage the speed and power-limiting efficiency mode and switch off the air-conditioning, a recharging stop on any run of over 250km will be required.

These days, of course, there are chargers at Milton, Lawrence, Ranfurly, Alexandra and Cromwell. Both the car itself and the Chargenet app that most EV owners will have on their phone, show which of those stations is not in use. I made use of the chargers at Ranfurly, Mosgiel New World and the University of Otago.

The 50kW DC fast chargers can fully charge the e-tron in about two hours, at a cost of 25¢ per minute plus 25¢ per kWh of charge, so a half-hour top-up should be all that is needed on a Dunedin to Queenstown trip.

Audi expects that around 85% of driving by e-tron owners in NZ will use power obtained by home charging, and the company has partnered with HRV to provide a single phase 32-amp home charger that fully charges the e-tron overnight. Alternatively, you can plug the car into a regular three-pin socket for a slower charge.

Discussion of range raises the question of battery life. Audi offers an eight-year battery warranty with the e-tron, on top of the vehicle’s broader five-year 150,000km warranty.

Verdict
Audi has become the latest in a small but fast-growing group of car-makers to transform an EV revolution from a ripple to a wave.

There are sportier choices at the luxury end of the electric SUV spectrum these days, but in terms of refinement, build quality and all-round usability, the Audi e-tron is the best yet.

What’s remarkable is that the e-tron is, in many respects, unremarkable; in other words a compellingly good premium SUV that just happens to be powered by electricity, rather than a self-consciously electric SUV wearing a premium badge. 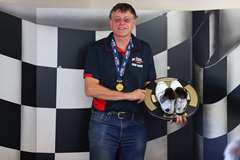 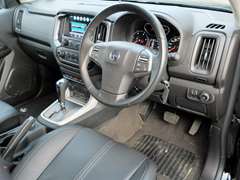 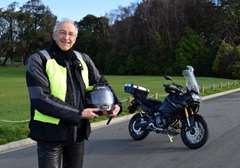 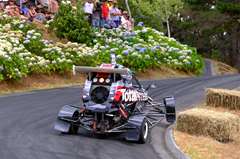